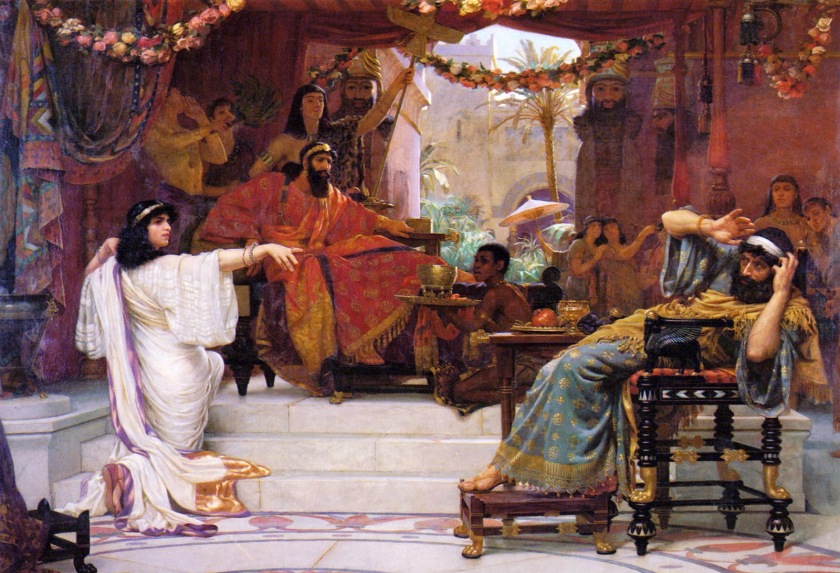 Since Trump’s election, I’ve been thinking about The Book of Esther often, and that makes sense: Esther is the Jewish concubine of an easily influenced and capricious king with dangerous advisors, particularly his vengeful and power-seeking prime minister, Haman. Because of her “in” with King Ahasuerus, Mordecai—her brother—and by proxy, the entire Jewish community, call on her to save them from annihilation, a genocide concocted by Haman after a small slight by Mordecai (sound familiar?). To do so, she must risk death. For one thing, it was against the rules for a concubine to seek out an audience with the king without his having summoned her, an offense punishable by death. For another, she’s easily expendable. Perhaps most importantly, she’s politically neutral up until Mordecai asks for her intervention. In the end, of course, she uses a series of banquets to persuade King Ahasuerus to call off his genocide, Haman gets what’s coming to him, and the Jews celebrate her success every year during Purim.

Scholars have labeled the story of Esther “apocalyptic literature,” “historical novella,” and “prophecy” among other genres. I’m most interested in the story as a study in political rhetoric and, in particular, a lesson on the relationship between feminine grief and political formation.

With regard to grief: Before Esther agrees to Mordecai’s request and risks death for her people, she asks for three days to pray, or—as I read them—three days of spiritual struggle with her God. The apocrypha includes more details about these prayers and describes Esther as covering herself in ash and rending her clothes, and tearing out her hair. She’s so wrecked with indecision and grief “she humbled her body greatly, and filled all the places of her joy with torn hair.”

I’ve been pulling out my eyebrows since I was twelve years old. Just a hair here and there, but mostly I touch them a lot. The technical term for such compulsive behavior is trichotillomania: from the Greek thrix (hair), tillein (pull) and mania (madness). Some trich-sters have bald spots on their head, scabs up and down their arms and faces. Mine is a mild, but tenacious case.

Stress feeds the pulling and prickles the roots. My husband will stand in our bedroom doorway as I lay in bed reading a murder-mystery. He’ll say, Baby, what’s wrong? and raise his own eyebrows a few times. I’ll realize I’ve been triching-out for the last half hour; an ache chugs through my wrist’s carpal tunnel, a common side effect. Tell me about it, he says, and shifts his slim weight across the doorframe.

When I was two, my father told me to spin in the living room and the dizziness that ensued sent me flying into the coffee table. He had to walk with me on his shoulders through an East Texas flood to the emergency room where I got a few stitches in my eyebrow. The scar is a slit through the arch of my eyebrow, and I color it in with makeup each morning before work. Around the scar, the most delicious hairs grow: stubby, thick things that I love to run underneath my fingers, that I love to remove most with my tweezers. The scientists call these “target hairs.” The feeling that blooms when I pry them from my face is something akin to peace.

I am not alone in my compulsion, or in its roots (no pun intended), since women have pulled their hair out for ages and ages. Still, science has only really started to consider hair pulling; trichotillomania wasn’t even included in the DSM until the late 80s, and was misunderstood as a form of OCD. Men suffer trichotillomania too, but at a much lower incidence that women (fewer than half as many), and more women suffer from “high sedentary contemplative” hair pulling which occurs as the afflicted is in a trance-like state while reading, watching television, talking on the phone. The behavior occurs at a slightly unconscious level to alleviate anxiety or sadness. While other forms of trichotillomania co-occur with a variety of other syndromes—bipolar disorder, schizophrenia, histrionic personality disorder—the contemplative types like me are comorbid with only one other major psychiatric problem: clinical depression.

We’re sad. Our sadness, while personal and particular and epigenetic, has its roots in ancient female sadness; the symptom as archetypal as the grief. Hippocrates wrote in his Epidemics III about Delearces, a grief-stricken patient who lost her son and “groped about, scratching and plucking out hair, and alternately wept and laughed.” Ancient Egyptian funerals included groups of women mourners who pulled out their hair. Achilles, when he hears of the death of Patroclus, tears out his hair. And Shakespeare has several characters pull out their hair too. Constance, in King John, insists that her grief is real and sane, saying “I am not mad: this hair I tear is mine.”

Hair pulling indicates sadness across history and time and, according to the great ancients and not-so-ancients, is a useful and universal externalization of internal suffering. Psychiatry has just caught up.

But back to Esther, and with regard to political formation: Esther is an unlikely hero. She certainly has some level of access to the Persian power center, but she’s apolitical and her position is lowly. Meanwhile all around her men of power behave rashly, their egos bruised by passing winds, their decisions reactionary rather than responsive. But when she’s pressed to act, she waits. Give me three days, she asks, and in those three days she grieves and grieves. Even when she meets with the King, she waits until a second banquet, another few days, before revealing her Jewish heritage and intervening for her people. Her timing is humble, impeccable, and pragmatic. It’s not coincidence that both white women in the Antebellum South and free black people of the North, positioned as they were both within an oppressed identity and within a more powerful group, invoked Esther, people like Mary Stewart and Sojourner Truth. And feminist theorist, Eve Sedgwick has used the book of Esther to consider the potential power in using the right timing to “come out.” Esther seems to offer a blueprint for those of us with some privilege that still identify with marginalized groups. How do we work with the little power we’ve got?

History offers this strange truth: female grief is often the impetus for pragmatic political response, our hair pulling a first step. Think of Maud Gonne, the Irish nationalist who mesmerized William Yeats, and whose political influence reached its apex after her son died of meningitis and she spent a few months studying the occult. Or, think of the madres de los desaparecidos in Argentina. Or the mothers of the gun reform movement in this country. Or the mothers of so many dead black boys. As scholar, Susan Zaeske writes, “Esther’s is a pragmatic rhetoric aimed at gaining power through ingratiation, despite and within an a debilitating context of oppression. It is worth nothing that by the end of the biblical tale, Esther speaks commandingly and without invitation.” She moves from grief-stricken, to quietly influential, to fully voiced and unafraid.

Some friends have noticed that I’ve become less overtly political—in conversations and on social media. It’s true. I’m overwhelmed, and I’ve been healing from some pretty serious sadness. In the small library in our home, my husband has hung a large drawing of a woman pulling out her hair that we bought at an auction to support creative writing in public schools. He never bids at auctions, but at that one, he said, “I think you need this piece of art.” A few months ago, our son Graham pointed at it and said, “Mama.” I was horrified: did he know that about me? That unfathomable well of sadness inside me, that slight mania writ large?

But I don’t know. When I talk to my therapist about sadness, the current political situation comes up often. I feel pressure to do something, but I also feel helpless. Both of my children, but especially my black child, may require I use what privilege I have. I am certainly in spiritual struggle, and I certainly have humbled my body and have filled the places of my joy with “torn hair.” Ultimately, it was my body that has forced me to say, “Give me three days.”

We live in a volatile realm, and our brothers may come to us to ask for our help. We’ll think we’re in no position to help; we’ll think we’re powerless. We’ll have to enter into private bed chambers and rend our hair, wrestle with our various Gods. We will want to stay safe–we aren’t safe–but our grief will cleanse us of ego and anger so that when we emerge, we’ll say as Esther did, “If I perish, I perish.” Then we’ll begin the long game of political persuasion and wait, our smiles sweet red herrings for our stealth, for the right moment to strike.

You won’t even see us coming.