One morning during the hopeful, horrible infertility treatment process, I clicked on a YouTube video posted by some obscure acquaintance in my newsfeed, one of those with a hyperbolic title like “This Fashion Video will Change Your Life” or “What This Dog Does is Amazing.”

In the video, a young scientist, Chao-Lin Kuo, approaches the home of physicist Andrei Linde, the architect of cosmic inflation theory. Cosmic inflation is a name for the rapid, exponential expansion of the universe in the fractions of a second after it burst into being. Big Bang believers have long thought cosmic inflation explains the gigantic size of our universe and all its parts, but have yet to provide evidence for this inflation.

Before he knocks on Linde’s door, Kuo announces to the camera that he has a surprise about gravitational waves that he and his team have discovered in the afterglow left by our universe’s violent birth. A highly sensitive telescope, the BICEP2, captured the space-time ripples by hunting for a special type of light polarization called B-modes.

I watched as the young scientist finally knocks and Linde and his wife, Renata Kallosh, also a physicist, answer.

Of course, I didn’t know what any of this means, but in the video Linde’s wife seems to understand first. She startles, and steps forward to embrace Kuo. Her husband stands back in the shadow of the doorway and says, “Can you repeat? Can you repeat?”

Andrei Linde falls through the doorway and over the threshold.

The three scientists pop open champagne in the couple’s dining room. I am struck by the ordinary in the room: a painted fan, a map of Tuscany hanging on the wall between windows, a blender shoved among other kitchen utensils on a shelf.

He says, “When the doorbell rang, my wife asked if I was expecting a delivery. Well, yes, a delivery I ordered 30 years ago!”

At the end of the video, Linde speaks to the camera alone. More serious, he says finally, “We’ll hope this works. I always leave with this feeling—what if I’m tricked? What if I believe in this just because it is beautiful?”

I thought about Linde’s last words for weeks:  What if I believe it just because it is beautiful?  Although Linde is a man of science, and what he believes in–The Big Bang, chaos turned, in a few seconds of cosmic luck, into the unlikely birth of a  universe–is widely contested by unimaginative religious people (who, ironically, believe in an unlikely birth), his question struck me as essentially spiritual.  I have asked myself the same question many times.  When I first got pregnant, I always wondered, “Will this work? Do I believe this science will work just because I want so badly for it to work?”  And I ask myself that about God.  Do I believe in something resembling God just because it is a beautiful story?  Do I believe in hope, peace, reconciliation, freedom, equality because they’re beautiful ideas?  Are all the things I believe in just beautiful, but ultimately elusive fictions?

But right now when the world feels unjust, chaotic, and unquenchably aflame I think we need beautiful stories–not as an escape or illusion, but because some part of our humanness understands that the most beautiful stories do not require proof: they’re true because they’re beautiful.  Proof is beside the point.  And if we’re engaging in mundane, binary arguments about their veracity, then we’re not trusting the stories or the stories are not beautiful enough and need to be rewritten, retold, or reread.

This week I reread Alice Walker’s “The Flowers” with my students, a story I love and one that spoke new truth to me after the Ferguson tragedy.  I also revisited the story of Lou Gehrig and Babe Ruth in the midst of the ALS ice bucket challenge craze.  Lou Gehrig remains my favorite baseball player of all time; he died, of course, of ALS, and in one of the most profound moments in American baseball he stood on the pitcher’s mound at Yankee Stadium and gave a farewell speech.  He was already suffering from the disease that would kill him, but his last words to his fans were, “Today I consider myself the luckiest man on earth…I may have had a tough break, but I have an awful lot to live for.  Thank you.”  All grace and humility, like his whole career.  But that’s not the beautiful moment for me.  After he spoke his former friend, longtime bitter rival, and all-around jackass, Babe Ruth, stepped up to the mound to hug Gehrig.  That hug ended a five-year long estrangement between the two men.  The photos of the moment–Babe Ruth’s large frame enveloping a frail Gehrig and, afterward, his head hung in deep reverence–capture the possibility of reconciliation. 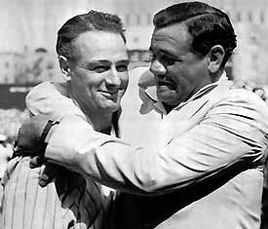 I’m not feeling all that profound this week.  The miraculous eludes me.  I find I cannot shed easily my political skin.  But I’d like to think if we hold ourselves open to possibilities at the furthest reaches of our imaginations, those possibilities captured in stories–reconciliation between enemies, flowers at the tombstones of history, science’s discoveries–then our capacity for awe will inflate  and expand.

Fyodor Dostoevsky once said, “Beauty will save the world.”

Turn to the beautiful stories, I tell myself.  Go to them with your soul willing and your intellect sharpened, especially in times like these.  They are, like Linde’s gravitational waves, the afterglow of our violent births.  They are the scattered shards of a broken light, more truth than proof.

3 thoughts on “Sermon for Beautiful Stories”